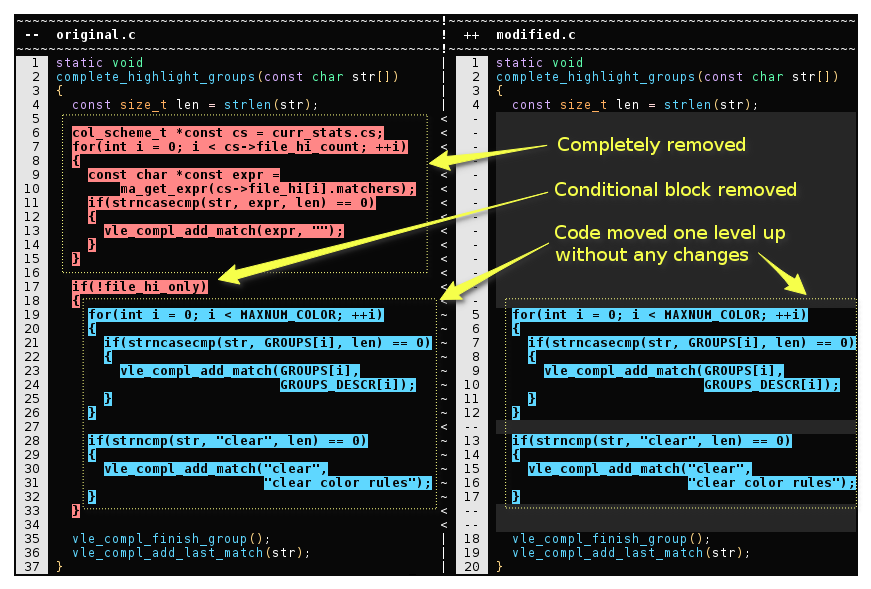 The exact grammar is that of C11 with extensions implemented in popular compilers and additional extensions needed to allow processing of code with macros.

Note the following: * old K&R style of function declarations isn't parsed (there might be a workaround for it, but this syntax is deprecated either way) * preprocessor directives aren't tokenized according to language rules yet, but their contents is diffed * extensive use of macros in unusual places might not be parsed (this probably won't change)

Other than that code in C89, C99, C11 and GNU-versions of C language should be recognized.

C++ support relies on external application called srcml and requires it to be installed in binary form (not necessary during build).

Reported standard version supported by srcml is C++14, so all previous ones should work too. Although their parser doesn't handle all language constructs equally well, it's seems to be good enough, especially for a ready to use parser that wasn't that hard to integrate.

Note the following: * the tuning of comparison is in progress and will be refined over time

It's hard to measure level of support in case of GNU Make, because there seem to be no reference for the syntax itself apart from documentation, which is not concise.

Yet parser is capable of processing quite complicated examples of Makefiles (like the one used in this project or generated by automake) which contain many features most people don't know exist. It's definitely not 100%, but 90% or even more of all existing Makefiles out there should be parsed.

Note the following: * the comparison might not produce best results on Makefiles as it needs some tuning, this should happen over time (Makefiles aren't changed that often)

Newly added (March 2021) with very little testing so far. However, the language is small and simple enough to not pose much difficulties.

Note the following: * non-5.3 versions might still work, albeit can produce worse results

More languages should be added in the future, maybe with external parsers that are capable of preserving all information about the source code.

Configuration is done per directory tree ("root") which is the closes parent (or current directory) that contains .zs/ directory. The .zs/ directory contains files which define how contents of the root is to be processed. Settings from multiple nested roots are not combined.

A .gitignore-like (or .git/info/exclude-like) file that lists paths relative to the root. The purpose is to exclude uninteresting files (automatically generated, third-party or otherwise). .zs/exclude is used by tools that search for files automatically and doesn't prevent the use of the same files when they are specified explicitly.

The following kinds of entries are recognized:

No way to escape leading # and ! or a newline at the moment.

Borrowing from the git project here again. This file consists of lines matching paths to attributes. Lines are trimmed before being processed.

Expressions that define exceptions (start with !) are recognized but ignored to keep syntax consistent between different files, which basically makes them another type of comments.

Each line of the file is visited in top down order and attributes from every matching entry are merged with the current state. Hierarchy of configuration values: 1. Default values (lowest priority) 2. Attributes 3. Command-line parameters (highest priority)

At the moment there is only --help option.